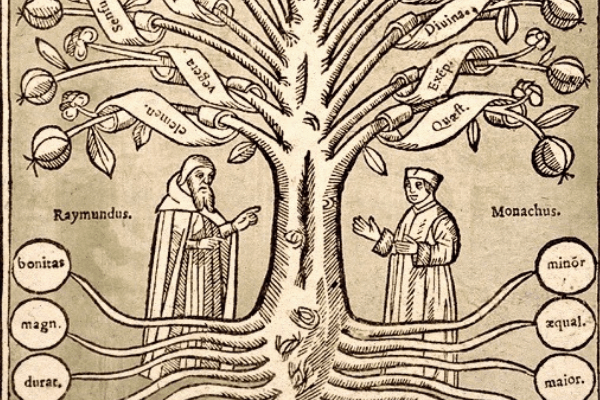 The history of mind maps

The first known mind map originates from around 300AD. It was drawn by the ancient philosopher, Porphyry, and shows the relationship between the material and immaterial things in this world. Born in Tyre, Lebanon, during the Roman Empire, Porphyry was known for his works on topics such as logic, astrology, vegetarianism, and Neoplatonism (an offshoot of the Image philosophy of Plato).

The first mind map, known as “The Tree of Porphyry.”

In Porphyry’s mind map, he illustrates how he categorises life on Earth, including living beings and inanimate objects. While categorising our world philosophically, he shows a connection between them all, creating a tree.

Since The Tree of Porphyry, the use of diagrams to show and connect ideas became useful for academics, entrepreneurs, researchers, and philosophers. For centuries, visual ways to show information have been useful for explaining information in a manner that is easy to understand.

In 1953, the term “brainstorming” was first used by an American advertising executive, Alex Faickney Osborn. He came up with the phrase when he began developing methods for creative problem-solving. He defined a brainstorming session (originally dubbed a “think up” session) as a group activity with the purpose to bring together new and creative ideas.

Brainstorming refers to the general task of generating ideas and doesn’t necessarily require drawing a diagram or mind map. Ideas are written down on large sheets of paper, sticky notes, whiteboard, or flipchart, with the goal of as many ideas as possible.

Quantity is preferred over quality, with all ideas, as wild as they may be, encouraged without any criticism from the group. Osborn was famous for quoting: “It is easier to tone down a wild idea than to think up a new one.”

The origin of the word “mind map”

It was in the 1970s that concept maps and mind maps became popularised. The term “mind mapping” was coined by Tony Buzan in 1974. A British psychology author and TV presenter, Buzan made this method of brainstorming, also known as “radiant thinking,” better known. His mind mapping technique was inspired by similar methods used by Leonardo da Vinci, Albert Einstein, and Joseph Donald Novak.

To create a mind map, the main theme is written in the centre of a page, and ideas are branched out hierarchically. It is a more organised method of drawing a spider diagram (spider map), where all ideas are drawn from the centre without any specific rules.

Buzan’s mind maps were famous for the use of bright colours. Usually, each branch from the main idea was a different bright colour. Each branch with its smaller branches was drawn in a similar curved style. Small drawings and illustrations were added to help with memory especially when used as a study aid.

Concept maps are very similar to mind maps as both are arranged with a hierarchy structure. Mind maps usually focus on one topic with a radial Image structure. Concept maps connect multiple ideas and branches within the map, known as cross-links. Joseph Donald Novak made it popular in 1972 at Cornell University. He used this method in the research of children’s knowledge of science.

Although mind mapping and concept mapping are slightly different ways to present ideas, the terms are often used interchangeably. Since the 70s, brainstorming using spider diagrams, mind maps, and concept maps has continued to stay popular. Now in the 21st century, these diagrams are more commonly created using online software such as Linkfacts.

Linkfacts makes it easy to switch modes and work on both concept maps and mind maps. It’s a digital tool that makes brainstorming easy and accessible for your team members online.

Start creating your mind maps for projects. It is a perfect tool for a research thesis or business meeting. Try LinkFacts for free to start brainstorming and organising your ideas.